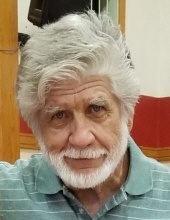 Phillip Don Davenport, 69, of Jefferson City, passed away Saturday, April 16, 2022, at his residence.

He was born December 3, 1952, in California, Missouri, to Horace Monroe and Ida Roetta Stepp Davenport.

He was united in marriage in 1971 to Judy Rose Kiesling in California, Missouri. On December 1, 1990, he married Laura Jane Whittle in Henley, Missouri.

He was a truck driver for Cole County Industries and Midland Oil Company.

He was a member of Big Rock Church in Barnett, Missouri and the American Legion, Post #5, Jefferson City.

Phillip was a fun person and enjoyed laughing with people. He loved music and played a guitar in several bands. He was a good dancer and invented the “Gomer Pile Shuffle” that he loved to dance at the American Legion. He enjoyed camping, fishing and in later years, he learned to crochet.

Visitation will be 4-7 p.m. Thursday, April 21, 2022, at Dulle-Trimble Funeral Home with military honors to follow.

To send flowers to the family in memory of Phillip Don Davenport, please visit our flower store.