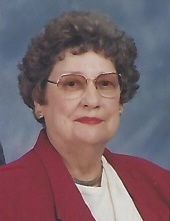 She was born September 4, 1931, in Jefferson City, the daughter of Joseph Anton and Caroline Mary (Lehman) Hadwick.

Pauline was a 1949 graduate of St. Peter High School.

She was united in marriage on September 5, 1964, at St. Peter Catholic Church in Jefferson City to Charles Louis Rost who preceded her in death on December 16, 2004.

Pauline worked for thirty-seven years as a secretary and later as a supervisor at the Missouri Department of Health and Senior Services.

Pauline was an avid golfer and proud to have played with various bridge clubs for over 65 years. She loved family gatherings and insisted on hosting every Thanksgiving and Easter holidays at her home. She enjoyed watching sports on TV and talking politics.

Mass of Christian Burial will be at 10 a.m. Tuesday, at Immaculate Conception Catholic Church with Rev. Donald J. Antweiler officiating.

Memorials are suggested to the Immaculate Conception Catholic Church.

Those wishing to email tributes or condolences to the family may do so at the www.dulletrimble.com website.
To send flowers to the family in memory of Pauline Elizabeth Rost, please visit our flower store.