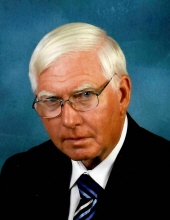 Paul Louis Laux, 82, of Jefferson City, passed away Saturday, 2021, at Jefferson City Manor, after a long battle with Parkinson’s Disease.

He was born June 15, 1938, in Jefferson City, the son of the late Victor Henry and Celeste Josephine (Hentges) Laux.

He was a 1956 graduate of Helias High School.

Paul served in the United States Army and served eight years in the National Guard, receiving the “Outstanding Achievement Award” in 1961.

He was united in marriage on August 25, 1962, in Westphalia to Frances Marie Boessen who survives at the home.

He was a member of St. Peter Catholic Church. He volunteered at Helias High School for over twenty years by operating the clock for girls’ basketball games, helped at the Helias Booster BBQ for over thirty years, helped on the Dream Team that met every Monday doing odd jobs, and was an Athletic Booster member for over thirty-five years.

Paul was twice named the Grand Marshall for the Helias Homecoming Parade and was the recipient of the Jim Rackers “Commitment to Excellence Award” in 2006. He was inducted into the Helias Catholic High School Hall of Fame in 2012.

He enjoyed gardening and could absolutely fix anything. He loved his two dogs Millie and Gracie.

He was preceded in death by his parents, a brother James (Linda) Laux and two sisters-in-law, Debra Laux and Mary Laux.

Mass of Christian Burial will be 10 a.m. Thursday, June 3, 2021, at St. Peter Catholic Church with the Rev. Jeremy Secrist officiating.

Burial with military honors will be in St. Joseph Catholic Cemetery in Westphalia.

Memorials are suggested to Helias Foundation.

Those wishing to send condolences to the family may do so at the www.dulletrimble.com website.
To send flowers to the family in memory of Paul Louis Laux, please visit our flower store.