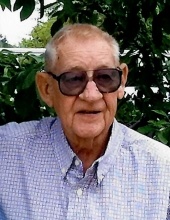 He was born January 23, 1940, in Jefferson City, the son of the late Clem and Frances (Sommers) VanLoo.

Paul was a 1958 graduate of Fatima High School in Westphalia.

He served his country in the United States Army.

Paul worked in sales for Rackers and Baclesse, Tharp Lumber and retired from Scruggs Lumber.

He was a member of St. Stanislaus Catholic Church in Wardsville where he participated in the Perpetual Adoration Chapel. He also coached Little League Baseball.

Paul enjoyed woodworking especially making military plaques that he would donate to Honor Flight participants. He enjoyed his time working the farm, watching his cattle eat grass, and riding around the farm on his tractor. Paul was a St. Louis Cardinals and Kansas City Royals fan, Helias Basketball and Football fan, and loved watching his grandsons’ sporting events. Those who knew Paul, will know how strong of a Republican he was and how much he liked to talk politics with anyone who would listen. Paul was most proud of his two grandsons.

He was preceded in death by his parents; one sister, Anna Marie VanLoo; and two brothers, infant John VanLoo and Clete VanLoo.

Mass of Christian Burial will be 11 a.m. Saturday at St. Stanislaus Catholic Church with the Rev. I.C. Medina officiating.

Entombment with military honors will be in the St. Stanislaus Catholic Cemetery Mausoleum.

In lieu of flowers, memorials are suggested to the St. Stanislaus School Foundation or to Central Missouri Honor Flight.

Those wishing to send condolences to the family may do so at the www.dulletrimble.com website.
To send flowers to the family in memory of Paul Joseph VanLoo, please visit our flower store.