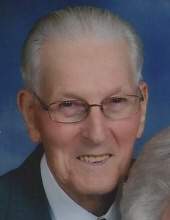 Paul Joseph Huhmann, 92, of Jefferson City, passed away Sunday, November 18, 2018, at The Arbors at Westbrook Terrace in Jefferson City.

He was born July 23, 1926, in Tuscumbia, Missouri, the son of the late Joseph Mathias and Mary Anna (Luebbert) Huhmann.

Paul was a 1944 graduate of Tuscumbia High School.

He was united in marriage on May 3, 1947, in Jefferson City to Regina Rosalia Klein who preceded him in death on February 6, 2018.

He was a member of Immaculate Conception Catholic Church and a lifetime member of State Highway and Transportation Employees Association of Missouri.

He was preceded in death by his parents; his wife; a granddaughter, Stephanie Harms; three sisters, Lucille Huhmann, Anne Lutz, Norma (Jim) Allain; a brother, Robert Huhmann; and a sister-in-law, Audrey Huhmann.

Mass of Christian Burial will be 10:30 a.m. Monday, November 26, 2018, at Immaculate Conception Catholic Church with the Rev. Geoffrey Brooke officiating.

Those wishing to email tributes or condolences to the family may do so at the www.dulletrimble.com website.
To send flowers to the family in memory of Paul Joseph Huhmann, please visit our flower store.