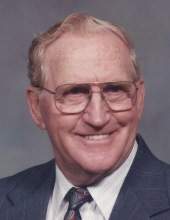 Paul Henry Hentges, 93, of Jefferson City, passed away Thursday, December 27, 2018, at his residence.

He was born March 20, 1925, in Jefferson City, the son of the late George Joseph and Sophia Marie (Cortvrient) Hentges.

Paul served his country in the United States Navy during World War II.

Paul worked in construction and at Westinghouse. He also worked most of his life as a farmer raising dairy and beef cattle. He was born, raised, and passed away on his family farm.

He was a member of the Cathedral of St. Joseph, Veteran of Foreign Wars, and the Knights of Columbus. Paul enjoyed traveling and spending time with his family and friends.

Mass of Christian Burial will be 10 a.m. Monday, December 31, 2018 at the Cathedral of St. Joseph with the Rev. Louis M. Nelen and the Rev. Msgr. Donald W. Lammers concelebrating.

Memorials are suggested to the Cathedral of St. Joseph or to SSM Health at Home.

Those wishing to email tributes or condolences to the family may do so at the www.dulletrimble.com website.
To send flowers to the family in memory of Paul Henry Hentges, please visit our flower store.