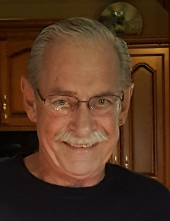 He was born July 24, 1947, in St. Louis, Missouri, the son of the late Carl George and Mildred Lee (Denham) Bergfeld.

He served his country in the United States Army during the Vietnam era.

He was united in marriage on December 23, 1972, in Clayton, Missouri to Michelle Andrea Neal who preceded him in death on November 3, 2005. In November of 2008 in Las Vegas, Nevada, he married Judith Susan Dill Avery who survives at the home.

Paul worked for the Missouri Department of Probation and Parole. He was a member of Alcoholics Anonymous, River City Habitat for Humanity, and HALO. He enjoyed Harley Davidson motorcycles, blues music, and playing the guitar.

Those wishing to send condolences to the family may do so at the www.dulletrimble.com website.
To send flowers to the family in memory of Paul Bradford Bergfeld, please visit our flower store.