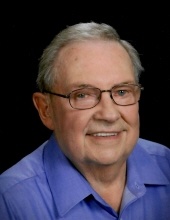 He was born June 26, 1932, in Taos, the son of Andrew Bernard and Teresa Bernadine (Veltrop) Lage.

He was married on April 23, 1960 in Frankenstein to LaVerne Elizabeth Koenigsfeld, who survives at the home.

Paul served his country in the United States Army from 1952-1954 and was proud to be stationed in the special regiment in West Point, New York during the Korean Conflict.

Paul’s love for woodworking led him to open Lage’s Cabinet Shop in 1963. He built many cabinets throughout Jefferson City and the surrounding communities. One of his last projects before his retirement was the walnut jewelry display cases he built for his daughter, Mary Kay Kempker, at The Blue Diamond, from wood he milled on the family farm. Paul was very proud that the cabinet shop still continues to serve the community as a family-owned business almost 60 years later.

Paul enjoyed life to the fullest. He was proud to be a pilot, enjoyed flying and was a member of the EAA (Experimental Aircraft Association). Paul was also a very creative man. He used his skills in metal working to create equipment and tooling that he used in his woodworking business. He loved using heavy equipment and was extremely proud of the lake he built on his farm. He enjoyed hunting and fishing, but most of all Paul, lovingly known as Poppie, loved spending time with his grandchildren and great-grandchildren.

Due to the Covid-19 pandemic, services are being delayed until the older adults have received their vaccines.

On what would have been their 61st wedding anniversary, visitation will be 11 a.m. to 1 p.m., Friday, April 23, 2021, at Immaculate Conception Catholic Church.

Mass of Christian Burial will be 1 p.m., Friday, April 23, 2021, at Immaculate Conception Catholic Church with the Rev. Donald Antweiler officiating. The service will be live streamed for those who wish to watch from home. The link can be found on Paul’s obituary page under Tribute Wall at www.dulletrimble.com.

Those wishing to send condolences to the family may do so at the www.dulletrimble.com website.
To send flowers to the family in memory of Paul Alfred Lage, please visit our flower store.