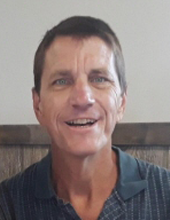 Patrick Martin Michael Brauner, 55, of Jefferson City, passed away Sunday, May 3, 2020, at his residence.

He was born March 17, 1965, in Jefferson City, the son of Joseph and Anna Marie (Distler) Brauner.

Patrick was a 1983 graduate of Helias High School. He attended Central Missouri State University and received his bachelor’s degree in Business Administration from the University of Missouri.

He was united in marriage on November 4, 1989, at the Cathedral of St. Joseph in Jefferson City to Christine Elizabeth Osterhage who survives at the home.

Patrick worked for McDonald’s as a store manager for over thirty years and currently worked for the United States Postal Service as a mail sorter.

He was a member of St. Martin Catholic Church and the St. Martin’s Knights of Columbus. He enjoyed golfing, bowling, playing volleyball, playing cards, fishing, taking naps, making bets, and especially loved being with his family.

He was preceded in death by his mother, Anna Marie Brauner.

Mass of Christian Burial will be 10 a.m. Friday at St. Martin Catholic Church in St. Martins, with the Rev. Stephen W. Jones officiating.

The general public is welcome to attend the services while following social distancing guidelines. Please stay 6 feet apart and avoid close contact. Anyone is welcome and encouraged to wear personal masks or other personal protective equipment while in attendance.

Memorials are suggested to the donor’s choice.

Those wishing to send condolences to the family may do so at the www.dulletrimble.com website.
To send flowers to the family in memory of Patrick Martin Michael Brauner, please visit our flower store.