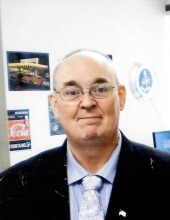 He was born on December 11, 1958, in Catawaba County, North Carolina, the son of the late Alfred Martin and Brenda Joyce Caldwell.

He served his country with the United States Army.

On April 3, 1981 in Schornorf, Germany, he married Dagmar Quick, who resides at the home.

Patrick was a supervisor at the State of Missouri Department of Family Services.

He loved to build models and dioramas of World War II and go fishing.

Burial with military honors will be in the Jacksonville Veterans Cemetery in Jacksonville, Missouri.

Those wishing to email tributes or condolences to the family may do so at the www.dulletrimble.com website.
To send flowers to the family in memory of Patrick Eugene Caldwell, please visit our flower store.