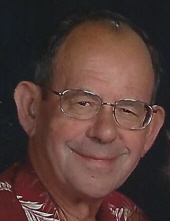 The youngest of four children, he was born on September 9, 1940, in Grand Island, Nebraska, the son of the late Henry Albert and Minnie Louise (Rudolf) Suck, Jr.

He was married on October 18, 1970, in Arapahoe, Nebraska, to Ruby Lorraine tenBensel, who resides at the home.

He was a member of Redeemer Lutheran Church in Springfield, Missouri.

Norris enjoyed gardening and bird watching. He was faithful to read his scriptures every day and loved poetry. An avid story teller, Norris wrote interesting short stories about his growing up years in Phillips, Nebraska on the family farm that was published in a book.

He was preceded in death by his parents; a son, Todd Justin Zook; and two brothers, Donny Suck and Stanley Suck.

Memorials are suggested to any Veteran’s charity of your choice.

Dulle-Trimble Funeral Home is in charge of the arrangements.
To send flowers to the family in memory of Norris Dean Zook, please visit our flower store.