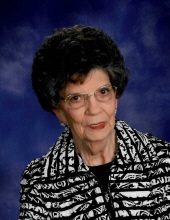 She was born March 11, 1935, in Jefferson City, the daughter of Louis Stephen and Esta Venita (Hendricks) Evers.

Norma retired after twenty-two years as an Auditor for the Missouri Department of Revenue, retiring January 4, 1993.

Norma actively supported her children through Girl Scouts, Boy Scouts and DeMolay. She continued to be equally supportive of her grandchildren through their personal endeavors. She loved her flower gardens and looked forward to her monthly luncheons with her family. She and her husband were RVers-snowbirds traveling across the United States but found Destin, Florida, their favorite.

She was preceded in death by her husband; two daughters, Mary Chapman and Bobbie Howard; three brothers, Clarence “Sonny” Evers, Jim Evers, and Roger Evers; and a brother-in-law, Herbert Powell.

Memorials are suggested to Veterans of Foreign Wars, Post 1003 or to the Wounded Warrior Project.

Those wishing to send condolences to the family may do so at www.dulletrimble.com.
To send flowers to the family in memory of Norma Jean Duncan, please visit our flower store.