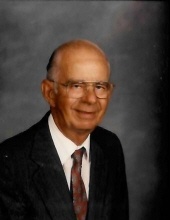 He was born July 19, 1925, in Taos, Missouri, the son of the late Linus Bernard and Lidwina (Wolken) Bernskoetter.

Norbert served his country in the United States Army during World War II.

He was united in marriage on April 21, 1951, at St. Stanislaus Catholic Church in Wardsville to Nadine Rose Stegeman who preceded him in death on July 29, 2015

Norbert worked on the family farm following his school years. After his honorable discharge from the US Army, he worked for International Shoe Factory and for Delong’s Inc. as a Foreman for over 40 years.

He was a member of St. Stanislaus Catholic Church, Wardsville/Osage Bend Knights of Columbus, American Legion Post 5, Fraternal Order of Eagle’s Arie 2693, and the Wardsville Lion’s Club. Norbert was a volunteer with the Taos/Wardsville Volunteer Fire Department.

He was a preceded in death by his parents; his wife, Nadine Bernskoetter; one sister, Catherine (Bobbie) Martin; and two brothers, Albert and Paul Bernskoetter.

Mass of Christian Burial will be 10 a.m. Friday, at St. Stanislaus Catholic Church in Wardsville, with the Rev. I.C. Medina officiating.

Those wishing to email tributes or condolences to the family may do so at the www.dulletrimble.com website.
To send flowers to the family in memory of Norbert Bernard Bernskoetter, please visit our flower store.