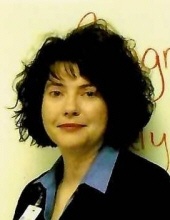 Nancie Marie McAnaugh, 58, of Jefferson City, passed away peacefully on Wednesday, February 23, 2022, at her residence.

She was born on June 4, 1963, in Elmhurst, Illinois, the daughter of Paul Chervenak and Irene Margaret Lyons Chervenak. Nancie was later adopted by Douglas McAnaugh whom she considered her true father.

She was married on October 19, 1991, in Flagstaff, Arizona, to Stephen Bernard Hick who survives at the home.

Nancie was a 1980 graduate of Marcos de Niza High School, Tempe, Arizona; received a Bachelor of Arts degree in English in 1992 from Northern Arizona University; and a Master in Social Work degree in 1997 from the University of Missouri where she later pursued PhD studies.

She was employed over the years with Northern Arizona University Bookstore; Arizona Highway Department; East Area Agency on Aging, Jonesboro, Arkansas; Harlan Still & Koch, Attorneys, Columbia, Missouri; Missouri Office of Administration; and the Missouri Department of Health and Senior Services where she served as Deputy Director for several years.

She was currently serving as Chief Operating Officer with LeadingAge Missouri, Jefferson City.

She was of the Roman Catholic faith.

She was a member of the Mid-MO Amateur Radio Club where she had served on the Board of Directors and as Volunteer Examiner Coordinator; American Radio Relay League; and the Cole County Amateur Radio Emergency Service (ARES).

For several years she and her husband assisted in the operation of Morse Code station V3T from Belize during the annual ARRL International DX Contest.

She was a devoted volunteer with the American Red Cross Smoke Alarm program.

She was especially fond of animals.

Other survivors include one brother, Mark McAnaugh, Colorado; seven cats and two dogs.

She was preceded in death by her parents and a brother, John McAnaugh.

A memorial service will be held at a later date.

To send flowers to the family in memory of Nancie Marie McAnaugh, please visit our flower store.