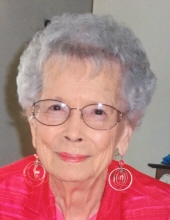 She was born February 22, 1923, in Neodesha, Kansas, the daughter of the late Emory Raymond and Hazel Pauline (Kebert) Shoop.

Nada worked for Mountain Bell Telephone Company in Colorado Springs as an Operator and Supervisor.

While living in Colorado Springs, she was a member of Fellowship of the Rookies Church. After Dale and Nada moved to Jefferson City they were members of First Baptist Church.

She was preceded in death by her parents; her husband; one sister, Roberta Kreller; and one brother, Raymond Eugene Shoop.

Those wishing to send condolences to the family may do so at the www.dulletrimble.com website.
To send flowers to the family in memory of Nada Maxine DeWeese, please visit our flower store.