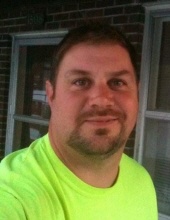 Matthew George Lock, 45, of Jefferson City, passed away at his home on Tuesday, November 5, 2019.

He was born October 7, 1974, in Jefferson City, the son of Melvin Theodore and Cecilia Eveyln (Bisges) Lock.

Matthew was a bricklayer.

He played football and was a wrestler all four years of high school at Helias. Matthew continued his football career at Missouri Southern State University playing all four years. He loved to golf, play poker and fantasy football. He was an avid Denver Broncos and St. Louis Cardinals fan.

Matthew loved playing with his nieces, Maggie and Morgan.

Mass of Christian Burial will be 12 p.m. Friday at St. Francis Xavier Catholic Church in Taos with the Rev. Michael W. Penn officiating.

In lieu of flowers, memorials are suggested to the St. Francis Xavier School Gym Renovation.

Those wishing to email tributes or condolences to the family may do so at the www.dulletrimble.com website.
To send flowers to the family in memory of Matthew George Lock, please visit our flower store.