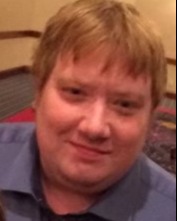 He was born on November 4, 1984, in Columbia, Missouri to William Ray and Julie Ann (Wekenborg) Cook.

He was a Master Level Case Manager at BJC Behavior Health.

Matthew loved the St. Louis Blues and was a loyal fan. He also enjoyed college football, and a variety of music particularly rock and roll. He was a history enthusiast particularly anything about the civil war. Matthew had a huge network of friends through online gaming and fellow sports fans.

He was a volunteer at the Humane Society in St. Louis and adopted a pit bull and was active in an organization that discouraged breed specific discrimination. He also volunteered for suicide prevention.

Memorials are suggested to Yadi’s Pittie Pals for Central Missouri.

To send flowers to the family in memory of Matthew Travis Shelby Cook, please visit our flower store.