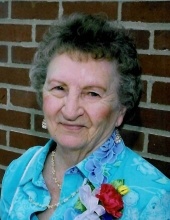 Mary Louise Distler, 91, of Jefferson City, passed away Thursday, April 21, 2022, at her residence surrounded by family.

She was born June 5, 1930, in Jefferson City, the daughter of Leo Carl and Pauline Wilhelmina (Cremer) Schmitz.

Mary was a 1948 graduate of St. Peter High School.

She was married on May 21, 1949, at St. Peter Catholic Church in Jefferson City to Louis Lawrence Distler, who preceded her in death on December 28, 2001.

Mary worked as a factory worker at Tweedie Shoe Factory and later McGraw Edison (Shop Smith). She then worked in the Immaculate Conception Grade School cafeteria for several years.

Mary was a member of Immaculate Conception Catholic Church, St. Ann Sodality, and the Legion of Mary. She was an avid bowler, playing on two teams when she was eighty-five years old, and she enjoyed quilting.

In lieu of flowers, memorials are suggested to Immaculate Conception Catholic Church, Hospice Compassus, or to a charity of the donor’s choice.

To send flowers to the family in memory of Mary Louise Distler, please visit our flower store.