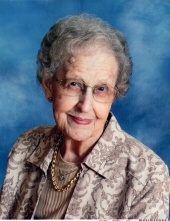 Mary Lou Heckman, 98, of Westphalia, passed away Monday, January 10, 2022, at Westphalia Hills surrounded by her family.

She was born December 2, 1923, in Westphalia, Missouri, the daughter of Henry A. and Gertrude (Castrop) Luebbert.

She was married on February 27, 1946, at the St. Joseph Catholic Church in Westphalia to John Peter Heckman, who preceded her in death November 9, 2015. They were married 69 years.

Before her marriage, Mary Lou worked three years at the Oberman Manufacturing Company in Jefferson City during World War II when they made Army and Navy uniforms. Once married, she was a homemaker raising their five children.

She was a member of St. Anthony of Padua Catholic Church and St. Ann’s Ladies Sewing Circle.

Mary Lou loved to quilt and enjoyed making quilts for each of her eighteen grandchildren and many baby quilts for the great-grandchildren. She also enjoyed baking for her family, traveling with her husband, working in her flower beds, and her beloved dog Mindy who was always by her side.

She was preceded in death by her parents; her husband, a son-in-law, Richard Schulte; two great-grandchildren, Kaitlyn Zimmer, and Cohen Isenberg; and two brothers, Wilfred (Esther) Luebbert and Leonard Luebbert.

Burial was in St. Anthony of Padua Catholic Cemetery.

Memorials are suggested to St. Anthony of Padua Catholic Church.

Dulle-Trimble Funeral Home in Westphalia was in charge of the arrangements.

Those wishing to send condolences to the family may do so at the www.dulletrimble.com website.
To send flowers to the family in memory of Mary Lou Heckman, please visit our flower store.