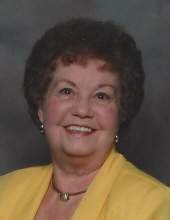 She loved the theatre and appeared in numerous productions of the Jefferson City Little Theatre including plays and musicals.

Always enjoying music she sang with the Jefferson City Symphony Choir, and the Lincoln University Community Choir. She was a member of The Morning Music Club. Kathryne loved to crochet, and special to her, was making blankets for babies in the Afghans for Angels.

She was preceded in death by her parents and one grandson.

Interment will be in Riverview Cemetery, Jefferson City, Missouri.

Memorials are suggested to either of the local Animal Shelters (Callaway Hills or Jefferson City Animal Shelter) or the donor's choice.

Dulle-Trimble Funeral Home is in charge of the arrangements.
To send flowers to the family in memory of Mary Kathryne Spangler, please visit our flower store.