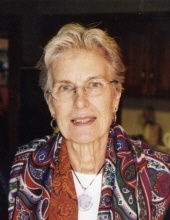 She was born March 10, 1928, in Wardsville, Missouri, the daughter of Albert Bernard and Marie Elizabeth (Winkelmann) Markway.

She attended St. Stanislaus School in Wardsville and was a graduate of St. Peters High School in Jefferson City.

She was united in marriage at St. Stanislaus Church in Wardsville to Harold R. Duckworth, who preceded her in death.

During her working career, Mary Kay worked for the Missouri Highway Patrol in Jefferson City, the Missouri Department of Revenue in St. Louis, and as a high school secretary in Kansas City. She enjoyed making art and became an accomplished painter, winning many ribbons for her work over the years and being featured in local magazines for her creativity.

Mary Kay gave her time generously as a volunteer wherever she lived. After moving to Omaha in 2006 she began her favorite volunteer position of all - rocking and comforting babies and children who were patients at the University of Nebraska Medical Center. While living at Bloomfield Forum Independent Living and New Cassel Assisted Living, she organized many a Scrabble game which resulted in her beating most of her fellow residents and her family members.

Besides her husband, Harold, she is preceded in death by one infant daughter, Dina; her parents, Al and Marie; one sister, Dorothea Croff; and six brothers, Norbert, Maurice, Marcellus, Jerome, Albert and Louis Markway.

A memorial Mass will be Monday, September 9, 2019 at 10:00 a.m. at St. Stanislaus Catholic Church in Wardsville with the Rev. I.C. Medina officiating.

Burial will be in St. Stanislaus Cemetery following the Mass.

Memorials are suggested to the National Alliance on Mental Illness or the charity of the donor's choice.

Those wishing to send condolences to the family may do so at the www.dulletrimble.com website.
To send flowers to the family in memory of Mary Katherine Duckworth, please visit our flower store.