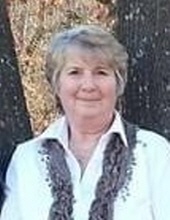 She was born September 25, 1952 in Jefferson City to the late James R. and Angeline (Kuehn) Renick. Mary attended St. Peter Catholic Grade School and was a graduate of Jefferson City High School. Before retiring, Mary was office administrator for several area nursing homes.

Family meant everything to Mary. As a single mother, she raised her three boys, Derrick, Timothy and Bryce. After they became adults, Mary moved from her home to take care of her parents. She was truly the hub of the family wheel. Even though she had a feisty personality, Mary always put others first.

When she wasn’t loving her grandbabies, Mary would find time to go antiquing, trips to flea markets and garage sales. Whether it was feeding deer and turkeys or tending to her flower garden, Mary enjoyed being outdoors.
Survivors include her three sons, Derrick (Kristina) of Fulton, Timothy (Amy Buechter) of St. Thomas, Bryce (Soula) of Columbia, nine grandchildren, McKenzie Ann, Crayton, Carson, Garrett, Alexis, Colton, Cayden, Dane and Macy, one great grandson, Weston and four brothers, James (Velma) Renick Jr., Daniel Renick, Thomas (Sarah) Renick all of Jefferson City and Robert Renick of Columbia. Mary was preceded in death by her parents and brother, Douglas.

Visitation will be Friday, March 18, 2022 from 4:00 p.m. until 7:00 p.m. at the Dulle-Trimble Funeral Home, 320 N. Ten Mile Drive, Jefferson City with a prayer service beginning at 3:30 p.m. The Mass of Christian Burial will be 10:30 a.m., Saturday at St. Peter Catholic Church, 216 Broadway, Jefferson City. Father Jeremy Secrist will officiate. Entombment will be held at a later date in Resurrection Cemetery.

Memorials may be directed to the family.

Those wishing to send condolences may do so at www.dulletrimble.com.

To send flowers to the family in memory of Mary Gallatin, please visit our flower store.