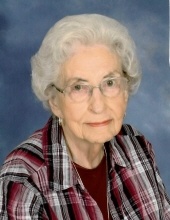 She was born November 27, 1929, in Jefferson City, Missouri to the late Harold and Harriet “Earl” (Finnell) Nienhueser.

After her High School graduation, Mary worked for the Missouri Department of Education from August 1947 until October 1952 when she was married. She moved to Iberia where she resided with her husband Robert, while he served in the U.S. Army. They moved back to Jefferson City in April 1954. Mary went back to work for the Missouri Department of Education until October 1957 and became a “stay-at-home” mom for 23 years. Mary returned to State employment for the Missouri Secretary of State Corporations Division in December 1982 until her retirement in December 1992.

She donated time for many church activities at St. Peter’s Church and School including helping in the school lunchroom, half days each week in the school office, church anniversary functions, church archives, and funeral luncheons.

Mary loved to travel, and she and Robert went on several trips in their early retirement years. She loved NFL & college football, especially the Kansas City Chiefs and Notre Dame.

Her favorite places to eat were Dairy Queen especially the Blizzards, Bandana’s BBQ, and Nick’s Restaurant. She was a generous supporter of St. Peter Church/School and Helias Catholic High School. She enjoyed being around her grandkids and her great-grandkids and her grand fur babies. She had a tremendous love for dogs and every family dog lived the “good life” in their household.

She was a skilled seamstress before arthritis made it too difficult, and a fantastic cook. She enjoyed playing cards and dominos with her friends monthly and going to lunch with her sisters-in-law.

Mass of Christian Burial will be 10 a.m. Saturday at St. Peter Catholic Church with the Rev. Jeremy Secrist officiating. The service will be live streamed for those who wish to watch from home. The link can be found on Mary's obituary page under the Tribute Wall at www.dulletrimble.com.

Memorials are suggested to St. Peter Property Maintenance Fund or to the Helias Foundation.

To send flowers to the family in memory of Mary Dolores Haake, please visit our flower store.