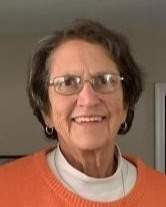 She was born June 6, 1951, in Jefferson City, the daughter of Charles Hugo and Kathryn Magdalen (Walsh) Fechtel.

Jackie attended St. Joseph Grade School and was a 1969 graduate of Helias High School where she was the first leader of the Drum and Bugle Corps.

Jackie was a devoted employee of the Missouri Secretary of State, Cole County Clerk, Cole County Circuit Clerk, Associated Court Reporters, Missouri State Attorney General, and most recently with Gerbes West. She retired from the State of Missouri in 2021.

She was a member of the Cathedral of St. Joseph.  Jackie was an avid crocheter, crocheting hats and blankets for babies in the NIC Unit; she also donated crocheted items to the Salvation Army and loved crocheting Afghans for her family and friends which are treasured dearly.  She lived for visits with family, especially feeding them and playing cards even though she claimed she never won. She also loved to bake and sent Christmas cookies all over the US to family during the holidays and never missed recognizing birthdays

She was preceded in death by her parents and a brother-in-law, Delbert Bias.

Mass of Christian Burial will be 10:30 a.m. Tuesday, November 15, 2022, at Immaculate Conception Catholic Church with the Rev. Dennis Meyer as celebrant.  Burial will follow at Resurrection Catholic Cemetery for family members.

An informal visitation will be held during the luncheon following the services at Pleus Hall, Immaculate Conception Parish.

Memorials are suggested to the Quilts of Honor (quiltsofhonor.org).

To send flowers to the family in memory of Mary Jacqueline Blackwell, please visit our flower store.