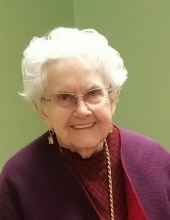 She was born September 23, 1931, in Washington, Missouri, the daughter of the late Edwin and Mary Elizabeth (Riegel) Jasper.

She was united in marriage on April 28, 1951, at St. Francis Borgia Catholic Church in Washington, Missouri to William Clarence Menke who preceded her in death on November 2, 1989.

Prior to her marriage to William, Mary worked for a garment factory in Washington before she was a stay-at-home mother. Following her youngest child starting school, Mary worked for DeBroeck’s Grocery Store, John Deeken and Bud Short State Farm Agencies, and worked in sales at the Montgomery Wards specifically in the Jewelry Department. Mary was also a Tupperware dealer and an Avon dealer.

She was a member of St. Peter Catholic Church and quilted with the Quilters Circle. She enjoyed bowling, ceramics, crocheting, knitting, quilting, and vacationing at the Lake of the Ozarks with her family.

She was preceded in death by her parents; her husband, William Menke; her son, Douglas Menke, her daughter, Barbara Schenewerk (Larry); grandson, Julian Menke, and a brother, Wilbert Jasper.

Visitation will be 10-11 a.m. Saturday, March 12, 2022, at St. Peter Catholic Church. Mass of Christian Burial will follow at 11 a.m. with the Rev. Jeremy Secrist officiating.

Memorials are suggested to St. Peter Quilters or to the National Shrine of Mary, Mother of the Church in Laurie, Missouri.

To send flowers to the family in memory of Mary Ann Menke, please visit our flower store.