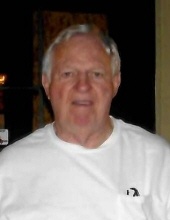 Marvin Victor Buthod, 86, of Russellville, passed away Wednesday, May 27, 2020, at University Hospital in Columbia, Missouri.

He was born March 30, 1934, in Loose Creek, Missouri, the son of the late Louis and Johanna (Schaefer) Buthod.

Marvin enlisted in the United States Air Force on November 9, 1951 and completed his basic training at Lackland AFB in Texas. He was stationed at Lake Charles AFB in Louisiana serving as a cook. He also spent two years stationed in Puerto Rico. In December of 1955, he joined the Air Force Reserves. He retired in May of 1989 as a Master Sergeant after four years of active duty and 34 years reserve duty.

He was united in marriage on September 30, 1980, in Jefferson City to Janet Ida Hix who survives at the home.

Marvin worked for Coca Cola for 40 years as a Route Driver and later retired as a Route Manager. After retirement, he worked at the American Legion Hall as a cook and for Riley Chevrolet as a courtesy driver.

He attended St. Michael Catholic Church in Russellville. He was a member of the American Legion and Elks Lodge. Marvin enjoyed collecting Coca Cola memorabilia, deer hunting, old cars, being in the outdoors, and his cats Missy and Max and dog, Lacie.

He was preceded in death by his parents; two infant brothers, Don and Donald Buthod, brother, Clarence Buthod; and a sister, Florence Branson.

Burial with military honors will be in Immaculate Conception Catholic Cemetery in Loose Creek.

The general public is welcome to attend the services while following social distancing guidelines. Please sit 6 feet apart and avoid close contact. Those attending are asked to wear personal masks while in attendance. Disposable masks will be provided by Dulle-Trimble Funeral Home if needed.

Those wishing to send condolences to the family may do so at the www.dulletrimble.com website.
To send flowers to the family in memory of Marvin Victor Buthod, please visit our flower store.