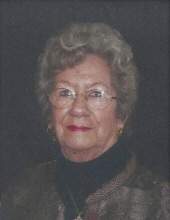 She was born August 14, 1937, in Jefferson City, to Lloyd Raymond and Goldie Mae (McKee) Horn.

She was married in 1954 in Jefferson City to Orville Monroe Buschman who lives in Atlanta, Ga. In 1993, Martha married Ava Jack Foster in Columbia. Jack preceded her in death in 2004.

Martha spent many years cleaning homes and businesses including the Ronald McDonald House in Columbia.

She was a former member of the Northwood Baptist Church in Hallsville and the Hallsville Red Hat Ladies. She enjoyed making her own greeting cards, gardening, and spending time with her family.

She was preceded in death by her parents; her husband, Jack Foster; two sons, Timothy and Keith Buschman; two grandchildren; and three brothers, Donnie, Junior, and John Horn.

Those wishing to email tributes or condolences to the family may do so at the www.dulletrimble.com website.
To send flowers to the family in memory of Martha Mae Foster, please visit our flower store.