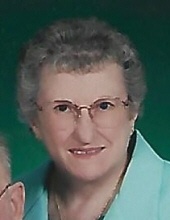 She was born February 26, 1932, in St. Elizabeth, Missouri, the daughter of the late Henry and Theresa (Duebbert) Boeckmann.

She was united in marriage on September 8, 1951, at St. Lawrence Catholic Church in St. Elizabeth, Missouri, to Norbert John Plassmeyer who preceded her in death on January 29, 2013.

Martha began work teaching in a one room school house, then helped her husband run Plassmeyer Cafe in St. Elizabeth, and eventually retired from Cheeseborough Ponds in Jefferson City as a quality control inspector.

After retirement, Martha and her husband enjoyed traveling the U.S. and Germany.

She was a member of the Cathedral of St. Joseph. She enjoyed crocheting, embroidering, fishing, and camping.

Mass of Christian Burial will be 10 a.m. Wednesday, at the Cathedral of St. Joseph with the Rev. Louis M. Nelen officiating.

Memorials are suggested to the American Heart Association.

Those wishing to email tributes or condolences to the family may do so at the www.dulletrimble.com website.
To send flowers to the family in memory of Martha M. Plassmeyer, please visit our flower store.