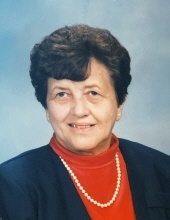 She was born March 1, 1925, in Jefferson City, the daughter of the late William L. and Elizabeth (Meyerpeters) Scheppers.

On April 30, 1949 she married James Krone who preceded her in death.

She was a graduate of Westphalia High School. After attending Rubicam Business College in St Louis, she worked at Laclede Gas Light Company in St Louis for the next six years. Martha then worked for the Missouri State Auditor’s Office for eight years, the Department of Revenue for twelve years, was City Clerk for Westphalia for 14 years and served as the trustee for the Thomas Jefferson Library and Osage County Library system for ten years.

She was preceded in death by her parents; her husband, James; and one son, Paul Krone.

Mass of Christian Burial will be 11 a.m. Saturday at Dulle-Trimble Funeral Home in Westphalia (due to the church remodeling and the St. Joseph School gym being unavailable) with the Rev. Anthony Viviano officiating.

Burial will be in St. Joseph Catholic Cemetery.

Memorials are suggested to St. Joseph Church or School.

Dulle-Trimble Funeral Home in Westphalia is in charge of arrangements.

Those wishing to send condolences to the family may do so at the www.dulletrimble.com website.
To send flowers to the family in memory of Martha Catherine Krone, please visit our flower store.