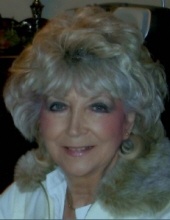 Skippy was born March 4, 1933 in Jefferson City, the only child of Harold Ralph Wilson and Mary Elizabeth Dunavant. She grew up in Mexico, Missouri where she graduated from St. Brendans High School.

In 1954, she was united in marriage to Herschel E. "Sonny" Megown. To this union three daughters were born, Kathy Sue, Jeri Lynn and Marianne. The family moved to Jefferson City in 1961 where she began her career as a bookkeeper. Skippy worked for Western Auto, G & H Electric, the Teamsters Union, the Secretary of State and retired from the Missouri National Guard after 24 years of service.

Skippy loved country music and owned the dance floor. She also enjoyed fishing, auctions, rummage sales and was a talented oil painter. She was an animal lover and throughout the years provided many rescues with love and care.

She was preceded in death by her parents and eldest daughter.

Services are private per her wishes.

Memorial contributions are suggested to the Jefferson City Animal Shelter.

Those wishing to send condolences to the family may do so at the www.dulletrimble.com website.
To send flowers to the family in memory of Marjorie L. "Skippy" Megown, please visit our flower store.