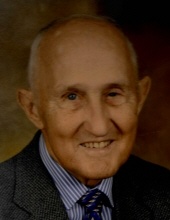 He was born in Marquand, Missouri, the son of the late Virgil and Vallie Marie (Monie) Moyers.

In addition to serving in the ministry he spent a career in the shoe industry working first for Shoe Factory Supply and later for Florsheim Shoe, where he demonstrated his strength of character, poise and composure in helping the organization through its financial restructuring.

He graduated from Marquand Zion High School in 1958, where he played several sports. He was passionate about sports and was an avid St. Louis Browns and St. Louis Cardinals baseball fan, an Alabama Football and a Montreal Canadians Hockey fan. After retirement, he spent many hours on the golf course with his wife Mary. He enjoyed traveling domestically and abroad and felt blessed to visit the Holy Land twice.

He also authored two books where both his humor and wisdom were apparent. However, his favorite role was as a husband and father and he excelled in both. He touched the lives of many was greatly respected by his colleagues, friends and competitors.

Marion is survived by his children Fonda Moyers (Lauren Mecker) and Nathan Moyers; one sister-in-law Betty Moyers; nephew Paul (Lisa) Moyers; niece Janet Cassidy (Moyers); and several cousins. He cared for and was cared for by Lynn Meyers.

Marion was preceded in death by his parents, his wife Mary Moyers, his daughter Charlene Lehenbauer, and his brother Melvin Ray Moyers.

Funeral services will be 11 a.m. Tuesday at Dulle-Trimble Funeral Home. The service will be live streamed for those who wish to watch from home. The link can be found on Marion’s obituary page under Tribute Wall at www.dulletrimble.com.

Graveside service will be 3:30 p.m. Tuesday, at Moore’s Chapel Cemetery in Marquand, Missouri.

A memorial service will be held in the future following the COVID pandemic for those who wish to join the family in a safer manner.

In lieu of flowers, memorials are suggested to the Food Pantry at Union Hill Baptist Church.

Dulle-Trimble Funeral Home is in charge of the arrangements.
To send flowers to the family in memory of Marion Louie Moyers, please visit our flower store.