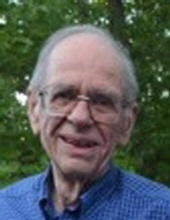 He was born in Fayette, Howard County, January 2nd, 1934, the son of Robert Lee Cooper and Anna Lou (Thurman) Cooper.

Mr. Cooper was the 3rd Great Grandson of Captain Sarshall Cooper, for whom Cooper County is named and who was one of the original settlers to the Boonslick Area in what is now Howard County. Sarshall was killed in Cooper’s Fort during the war of 1812.

Mr. Cooper was a graduate of Fayette High School, and of the University of Missouri, Columbia, B.S. Education. He was a Teacher and Counselor at Brentwood and Salisbury, MO Public Schools for five years before joining the Missouri Division of Employment Security as an Employment Counselor, 1962. His career included Counselor, Moberly Local Office, Supervisor in the Columbia Local Office, Manager of Marshall Local Office; and at Central Office: State Youth Program Supervisor; District Supervisor, Chief of Staff Training for the Division, and then was on loan to the U.S. Labor Department in Kansas City as Regional Training Center Director of region training center for Missouri, Kansas, Iowa and Nebraska. This training center was rated the best of the 10 training centers. Mr. Cooper retired from the division in 1995 after 33 years. He was a co-founder of American Society for Training and Development, Mid-MO Chapter.

He enjoyed following his sons’ and grandchildren’s school activities.

Visitation will be 5-7 p.m. Thursday, February 7, 2019, at Dulle-Trimble Funeral Home in Jefferson City.

Those wishing to email tributes or condolences to the family may do so at the www.dulletrimble.com website.
To send flowers to the family in memory of Marion Lee Cooper, please visit our flower store.