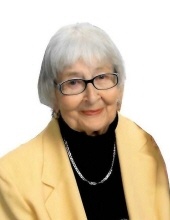 Marilyn Arline Plassmeyer, 91, of Jefferson City, passed away Tuesday, September 22, 2020, at her residence.

She was born on April; 13, 1929, the oldest daughter of the late George William Onken and Irma Davis Onken.

In 1930, the family moved to Jefferson City.

She was married on December 27, 1948, in Jefferson City to Anthony Francis Plassmeyer who preceded her in death on February 24, 2009. They made their home in Westphalia, Missouri, until 1967 when they bought a farm on the Osage River near Folk, Missouri.

Marilyn was originally hired part-time by Three Rivers Electric Cooperative to edit their membership newsletter. Two years later she went to work for them full-time until retiring as Manager of the Members Services Department following thirty-two years of faithful employment.

She was a founding member and past president of the Westphalia Historical Society. She was a recipient of several professional and civic community awards.

In her retirement she was a volunteer in reading with Fatima Elementary and Cedar Hill schools for over fifteen years. She retired when she turned 89.

Her proudest achievement was her family.

She was preceded in death by one sister, Marcia Burwell.

A Celebration of Life will be held at a later date. Her body was donated to the University of Missouri.

Those wishing to send condolences to the family may do so at the www.dulletrimble.com website.
To send flowers to the family in memory of Marilyn Arline Plassmeyer, please visit our flower store.