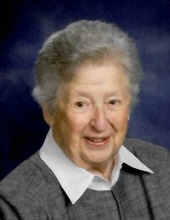 She was born October 18, 1921, in Russellville, MO, the daughter of the late Frank and Catherine Hilkemeyer Bruning. She was married on May 1, 1947, in Russellville to Alden Joseph Campbell, who preceded her in death March 12, 2002.

Marie graduated from Russellville High School and Sedalia Business College. In addition to being a loving wife and mother, she worked her entire life, loved every job she had and was a valued asset to all the employers. Marie’s career started as a teacher at Teal Bottom School, Henley, then on to St. Louis with Union Pacific Railroad, back to Jefferson City and worked for Gordon Sound System, Missouri State Correctional Center, and Missouri Real Estate Commission where she retired as the Executive Director. After her retirement, she returned to work part-time for the State of Missouri in the Department of Revenue.

She volunteered for Meals-on-Wheels, St. Mary’s Auxiliary working in the gift shop and as an election poll worker. Marie was a member of St. Michael’s Catholic Church and the Quilting Angels. Marie’s greatest pleasure was spending time with her family; further, she enjoyed working in her garden, canning, sewing, quilting, playing games particularly pinochle and was a rabid Cardinal baseball fan.

She was preceded in death by two sisters, Dorothy Reinke and Catherine Schulte and two brothers, Sylvester Bruning and Bernard Bruning.

Mass of Christian Burial will be 11 a.m. Thursday at St. Michael Catholic Church in Russellville with the Rev. Msgr. Robert A Kurwicki officiating.

Burial will be in St. Michael Catholic Cemetery.

Scrivner-Morrow Funeral Homes in Russellville is in charge of the arrangements.
To send flowers to the family in memory of Marie Elizabeth Campbell, please visit our flower store.