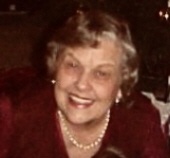 She was born on April 11, 1926, in Racine, Wisconsin, the daughter of the late Claude and Lillian Johnson Bergstrom.

She was a 1944 graduate of Park High School in Racine.

Mrs. Bergstrom was employed with Pacific Oil Seeds Incorporated, Woodland, California, for ten years, later as a clerk typist with the Missouri Division of Aging for several years, and retired from Walmart.

A member of the Lutheran Church in America, she enjoyed listening to her mass record collection, dancing, making family videos, gardening, growing mums, and playing rummy. She loved working at Walmart. She worked mainly in the Deli department. In 1988, she was Cashier of the Year. Shortly after she retired from Walmart, one day she was shopping there, and one of the managers asked her to come back part time to be a door greater. She was flattered, but gratefully turned them down. Her house was always open to family and friends, and she never met a stranger.

She was preceded in death by one daughter, Susan Wilson; and three sisters, Joyce Simonsen, June Bergstrom, and Phyllis Rue.

Those wishing to send condolences to the family may do so at the www.dulletrimble.com website.
To send flowers to the family in memory of Margaret Grace Bergstrom, please visit our flower store.