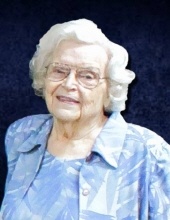 She was born January 10, 1927, in Taos, Missouri, the daughter of the late Theodore J. and Antonia Elizabeth (Castrop) Sanning.

Margaret worked as a nurse's aide for St. Mary’s Hospital in the Maternity Ward, and as a secretary for the State of Missouri, IBM, and for the Diocese of Jefferson City Chancery.

She was a member of Immaculate Conception Catholic Church, Immaculata Club, and volunteered counting collections at church. She enjoyed sewing, quilting, playing cards, gardening, and spending time with her grandchildren and great-grandchildren.

She was preceded in death by her parents; her husband, Robert; one brother, Leonard Sanning; and a brother-in-law, Claron Pickert.

Visitation will be 9 a.m. to 12 Noon Saturday, December 14, 2019, at Immaculate Conception Catholic Church with a prayer service at 9 a.m.

Mass of Christian Burial will be 12 Noon Saturday, December 14, 2019, at Immaculate Conception Catholic Church with the Rev. Joshua Duncan officiating.

Memorials are suggested to Diocese of Jefferson City Vocations or to Immaculate Conception Catholic Church.

Those wishing to send condolences to the family may do so at the www.dulletrimble.com website.
To send flowers to the family in memory of Margaret Bernadine Benne, please visit our flower store.