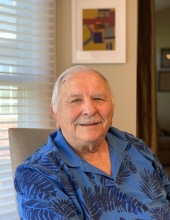 On August 1, 1953, Lou married the love of his life, Betty Jean Pelikan in St. Louis. They shared over 57 wonderful years of marriage together and were blessed with three daughters: Linda, Debbie and Susan.

Lou was a hard working man and took great pride in taking care of his family. He worked for Scott-Lee Heating Company in St. Louis and was a career long member of the International Association of Sheet Metal Workers, Local 36.

Lou was an avid golfer credited with a hole-in-one and was an avid bowler with a sanctioned 300 game. He enjoyed fishing trips to Canada and helping in the kitchen with his wife Betty especially during the holidays baking Christmas cookies for the family.

Lou passed away Saturday, December 11, 2021, in his home in Jefferson City at the age of 86. He will be sadly missed by all those that knew and loved him.

In addition to his parents, Lou was preceded in death by his wife Betty Pilas and a brother, Richard Pilas.

Private family services will be held at a later date at Resurrection Catholic Cemetery and Mausoleum in Jefferson City, Missouri.

Arrangements are under the direction of Dulle-Trimble Funeral Home in Jefferson City.

Those wishing to email tributes or condolences to the family may do so at the www.dulletrimble.com website.
To send flowers to the family in memory of Louis Matthew "Lou" Pilas, please visit our flower store.