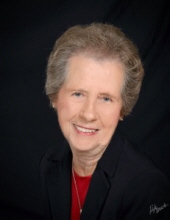 She was born December 19, 1937, in Tipton, MO, the youngest daughter of the late Peter Edward and Alma (Fischer) Bestgen.

She was united in marriage on June 3, 1961, at Annunciation Catholic Church in California to Donald Millard George who preceded her in death on April 20, 2021.

Loretta was a 1955 graduate of California High School. She spent years working at Moniteau National Bank and Commerce Bank before retiring and providing in home care for several children.

She was a member of Annunciation Catholic Church and served as the luminaria chair for the Relay For Life of Moniteau County for several years.

Loretta’s happiest moments were working in her yard and cooking Sunday dinners for her family. She was known for her hospitality, sweet treats and homestyle dishes. She was very proud of her family and was known as grandma to many. She was a life-long supporter of Pinto Athletics and faithfully attended all games that her kids and grandkids played.

Mass of Christian Burial will be 11 a.m. Monday, February 7, 2022, at Annunciation Catholic Church in California with the Rev. Tony Rinaldo officiating.

Burial will be in Annunciation Catholic Cemetery.

Memorials are suggested to the Relay For Life of Moniteau County (California Girls team).

Those wishing to email tributes or condolences to the family may do so at the www.dulletrimble.com website.
To send flowers to the family in memory of Loretta Ann George, please visit our flower store.