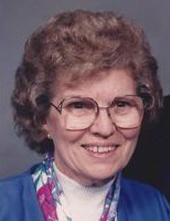 Lorene was born July 7, 1924, in Climax Springs, Missouri, the daughter of the late George and Lydia (Scott) Percival.

Lorene was baptized in 1940 at Linn Creek Baptist Church.

In 1943, she was married to Russell L. Nichols from which this union came two daughters and one son. She later was united in marriage on August 5, 1974, to Edgar E. Kautsch who survives at the home.

Lorene owned and operated Stringtown Service Station from 1965-1975. She began working at K-Mart in Jefferson City in 1974, after the store opening until her retirement in 1987.

She was a member of St. John’s Lutheran Church in Stringtown.

After her retirement from K-Mart, she enjoyed working on the farm with Edgar. She loved gardening, bird watching, spending time with her family and cooking for them. There was never a dull moment being around Lorene. You never knew what mischievous things she might say to you.

She was preceded in death by her parents; one brother, George Percival; and two sisters, Anna Huddleston and Bertha Shivers.

Visitation will be 2-4 p.m. Sunday, February 5, 2017, at Scrivner-Morrow Funeral Homes in Russellville.

Burial will be in St. John’s Lutheran Cemetery-Stringtown.

Memorials are suggested to the St. John’s Lutheran Cemetery-Stringtown.

Scrivner-Morrow Funeral Homes in Russellville is in charge of the arrangement.s
To send flowers to the family in memory of Lorene N Kautsch, please visit our flower store.