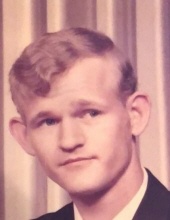 Lonnie Clarence Blackwell, 71, of Jefferson City, passed away Monday, January 25, 2021, at his residence.

He was born on November 30, 1949, in Vienna, Missouri, the son of the late Clarence Orville and Myrtle Lee (Copeland) Blackwell.

He was united in marriage on October 5, 1968, in Jefferson City to Sharon Ann Crocker, who resides at the home.

Lonnie was one of the first three employees of Scholastic Inc. in 1968, when they first moved to Jefferson City. He was a forklift operator for forty-six years, retiring in 2014.

He was an avid sports fan, especially the St. Louis Cardinals. He also enjoyed watching the news and Jeopardy.

He was preceded in death by his parents, a granddaughter, Ashley Blackwell, and a sister, Cathy (Larry) Onger.

Memorials are suggested to Dulle-Trimble Funeral Home, to help with funeral expenses.

Dulle-Trimble Funeral Home is in charge of arrangements.
To send flowers to the family in memory of Lonnie Clarence Blackwell, please visit our flower store.