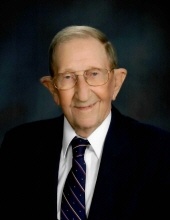 Lloyd Louis Dulle, age 90, of Jefferson City, passed away Saturday, October 30, 2021, on the family farm. He was born September 7, 1931, in Cole County, the son of Louis and Susanna Wekenborg Dulle.

Lloyd was a 1949 graduate of St. Peter Catholic School and served in the United States Army during the Korean Conflict from 1952-1954.

On September 15, 1956, Lloyd was united in marriage to Patricia Ann Goeller at St. Peter Catholic Church. His wife and family, especially his grandchildren were the center of his life. He was a fourth-generation farmer, hardworking, kind, soft spoken, and enjoyed a good laugh. When he wasn’t in the field or the barns, he could be found fishing, dancing, playing cards, traveling and hosting large family gatherings. He was a member of the Holy Name Society and lifelong member of St. Peter Catholic Church.

He retired in 1987 after 30 years with the Missouri Department of Transportation, District #5.

He was preceded in death by his parents; an infant brother, Chester Dulle; a sister, Evelyn Heckerman Frasher; a grandson, Aaron Dulle; in-laws, Jerry and Rosa Goeller, Joe and Rosalie Heislen, Billy and Virginia McDowell, William Heckerman, and James Frasher.

Visitation will be 9-10:30 a.m. Thursday, November 4, 2021, at St. Peter Catholic Church followed by a Mass of Christian Burial at 10:30 a.m. The Rev. Jeremy Secrist will officiate with Deacon Thomas Gerling assisting. Burial with military honors will be in Resurrection Catholic Cemetery.

In lieu of flowers, memorials may be made to St. Peter Catholic Church or to the Alzheimer’s Association.

Those wishing to send condolences to the family may do so at the www.dulletrimble.com website.
To send flowers to the family in memory of Lloyd Louis Dulle, please visit our flower store.