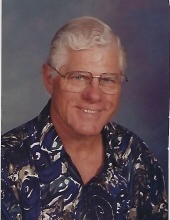 He was born July 24, 1934, in Jefferson City, the son of the late Lloyd Julius and Helen Mary (Wolken) McNew.

He was a 1953 graduate of St. Peter Catholic High School.

Lloyd worked for Pitney Bowes as a salesman of office equipment, 3M and for Al Scheppers Motors with his dad.

He was a member of Stanislaus Catholic Church where he served as usher, sang in the choir, and for many years printed the weekly church bulletin. Additionally, Lloyd was a co-founder Charter Member of the Wardsville Lions Club. He received a Presidential Certificate of Appreciation from The International Association of Lions Clubs, which is the highest award to be given having achieved over 40 years as a Lions member. This type of service was instrumental in raising money for many charities and helping those in the community with any hardships. The Lions motto ~ “We Serve”.

Lloyd especially enjoyed fishing and had a knack for finding just the right jig until the crappie would bite. He also liked hunting, dancing, golfing, throwing horseshoes, and swimming. For exercise he swam at the YMCA a few times a week. Lloyd was a member of a weekly bowling league and an avid St. Louis Cardinals baseball fan. Other interests included gigging, word search, Sudoku, putting puzzles together and playing cards, with pinochle being his specialty.

Lloyd was a wine connoisseur. He loved to make and share his homemade wine. He was a softball coach for his daughters and passed on many of his traits to his sons, one in particular being his wood-working skills.

Canning, cooking, weekend boating, teaching his children how to water ski and BBQ’s were also some of the things that made him happy.

Lloyd was always the one behind the camera taking pictures and videos of family and friends that will be cherished with fond memories for a lifetime. His hard work ethics and persistence to any task was apparent. To sum it up, Lloyd was the jack of all trades and was also a great father. There wasn’t anything he wouldn’t try, but nothing compares to the lengths he would go for his family and the love he had for his children and grandchildren.

He was preceded in death by his parents; one son, Jeff McNew; and a brother, Kenneth McNew.

Mass of Christian Burial will be 11 a.m. Monday at St. Stanislaus Catholic Church in Wardsville with the Rev. Joshua Duncan officiating.

Those wishing to send condolences to the family may do so at the www.dulletrimble.com website.
To send flowers to the family in memory of Lloyd John McNew, please visit our flower store.