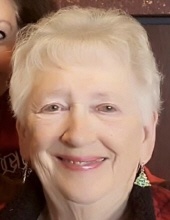 She was born October 31, 1938, in West Plains, Missouri, the daughter of the late Milton “Gus” and Andree (Guyonnet) Hoyer.

She was a 1956 graduate of Jefferson City High School. She was the high-spirited cheerleader that went on to marry the football star.

She was united in marriage on August 29, 1959, at St. Peters Catholic Church in Jefferson City to Lawrence Francis “Larry” Scheuler who preceded her in death on May 26, 2010.

Linda began her working career as an X-Ray Technician and later served for many years as the Secretary to the Principal at the School of the Osage High School. She was known for her kindness,laughter and exhuberance. Numerous kids felt like she was a second mother to them.

She was a member of Our Lady of the Lake Catholic Church, where she was a past President of the Altar and Rosary Society. She enjoyed camping, hiking, numerous trips to Silver Dollar City with her family for Old Time Christmas, the performing arts, cooking classes, playing Bunco, traveling the world and any activity that involved her kids and grandkids. Her family has fond memories of her ziplining, rapelling, horseback riding, swimming and walking 2-3 miles a day.

She was preceded in death by her parents; her husband, Larry Scheuler; and her sister, Claudette Heinen.

Private family viewing was held at Dulle-Trimble Funeral Home. A private Mass of Christian Burial was held at Our Lady of the Lake Catholic Church with the Rev. Msgr. Marion Makarewicz officiating. Burial was in Hawthorn Memorial Gardens.

Public services will be celebrated at a later date after the quarantine is over.

Memorials are suggested to School of the Osage High School for higher education scholarships or Trailwest Young Life Family Camp, a faith-based family camp in the mountains that she loved and that many claim is “the best week of your life” (www.trailwest.younglife.org).

Those wishing to send condolences to the family may do so at the www.dulletrimble.com website.
To send flowers to the family in memory of Linda Scheuler, please visit our flower store.