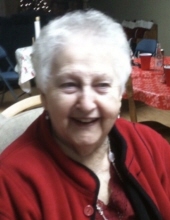 She was born December 15, 1927, in Vienna, Missouri, the daughter of the late Dewey and Ida (Dambach) Albertson.

She was united in marriage on January 27, 1945, in Little Rock, Arkansas to Frank Anthony Sonny Dickneite who preceded her in death on December 5, 2003.

A homemaker, she was a former member of St. Peter Catholic Church and attended Immaculate Conception Catholic Church. She enjoyed embroidering, watching the St. Louis Cardinals and she loved flowers. She especially enjoyed her trips to the casinos.

Mass of Christian Burial will be 11 a.m. Friday, September 14, 2018, at Immaculate Conception Catholic Church with the Rev. Donald Antweiler and the Rev. James Finder concelebrating.

Memorials are suggested to Immaculate Conception Catholic School or to Masses.

Those wishing to email tributes or condolences to the family may do so at the www.dulletrimble.com website.
To send flowers to the family in memory of Lillian Genevieve Dickneite, please visit our flower store.