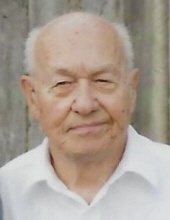 Leroy Raymond Distler, 85, of Jefferson City, passed away Saturday, March 9, 2019, at his residence surrounded by his family.

He was born September 1, 1933, in Jefferson City, the son of the late Joseph Anthony and Cecilia (Cortvrient) Distler.

He was united in marriage on July 4, 1959, at St. Peter Catholic Church in Jefferson City to Eva Mae Brandt who survives at the home.

Leroy worked as an electrician for IBEW Local 257 for over 32 years retiring in 1995. He was a member of Immaculate Conception Catholic Church. He enjoyed golfing and gardening.

He was preceded in death by his parents; two sons, Mark Distler on March 8, 1985 and Mitchell Distler on August 29, 2002; two sisters, Agnes Klein and Pauline Distler; and two brothers, Louis and Robert Distler.

Entombment was in Resurrection Mausoleum.

Those wishing to send condolences to the family may do so at the www.dulletrimble.com website.
To send flowers to the family in memory of Leroy Raymond Distler, please visit our flower store.