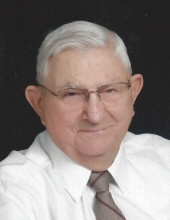 He was born August 13, 1929, in Folk, the son of the late Joseph Henry and Regina Cecelia (Feltrop) VanLoo.

He was a graduate of Westphalia High School.

LeRoy served during the Korean Conflict with the United States Army.

Retiring in 1998, he worked thirty-eight years as an Administrative Assistant for the Missouri Department of Health.

LeRoy was devoted to his parents and cared for them in their later years. He was kind and generous with all people and volunteered daily at the Carmelite Monastery. He loved animals especially dogs.

He was preceded in death by his parents, and two sisters, Rose (Clem) Distler, and Lucille (Vince) Koerber.

Mass of Christian Burial will be 10 a.m. Tuesday, April 23, 2019, at the Cathedral of St. Joseph with the Rev. Louis M. Nelen and Rev. Joshua J. Duncan con-celebrating.

Burial will be in the St. Anthony of Padua Catholic Cemetery, Folk, Missouri.