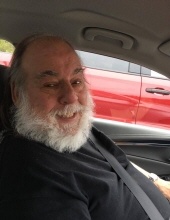 Larry “Rusty” Jefferson Roberts, 76, of Jefferson City died Wednesday, December 2, 2020, at SSM Health St. Mary's Hospital. He was one of 2,885 people who died that day from the COVID-19 pandemic (Johns Hopkins); leaving his wife, Mary Frances to continue waging her own battle against the virus.

In Huttig Arkansas, on Aug 26, 1944, Rusty was born to Betty Jane Webb and Troy "Buddy" Jefferson Roberts. He grew up swimming, fishing and later boating in the Ouachita river; duck, deer and squirrel hunting, anything outside. He enjoyed teasing his much younger sister, loved playing guitar and dancing. He also inherited a lifelong daily habit of eating peanuts or peanut butter from his Grandpa Tugwell.

As Rusty was excelling in pinball and showing promise with a 'great arm' in Little League, the family moved to Trinidad where his father did offshore oil well drilling. He embraced the culture, became fluent in the language and enjoyed translating in service, professionally and for fun, the rest of his days.

It was during this time he met Barbara Eloisa Mouttet, his future wife and mother of his children. She was to precede him in death by 25 years and 1 day, on Dec 1, 1995. Rusty graduated from Huttig High School in 1962 after returning from Trinidad, with new stories to share with his friends. He would enjoy trips home to Ark. for the rest of his life, swimming, fishing, seeing Rose and his friends.

During the tumultuous period of the Cold War he was a Navy cook on the destroyer USS Saufley, part of the patrols in the Cuban Missile Crisis. While still serving later the following year, he recalled an announcement over the PA System to "darken ship/quiet ship"; followed by the eerie wait for the threat level to lessen, later finding out President Kennedy had been assassinated. He had sea stories to spare and a big personality to give them gusto.

After leaving the Navy Rusty married, built a family and raised his girls. He worked an offshore oil drilling well near LA and was a Police Officer in Galveston TX for several years. Later he worked Security at K-Mart and Walmart and he opened a gun repair/sales shop.

In the late 90's Larry landed in Missouri, working as Security Manager for a Casino in KC before settling down in Jefferson City. It was while keeping Gerbes secure, he befriended the Deli Lady, who was working for her granddaughters dance classes. They married Nov. 13, 2004, at St. Martin Catholic Church, the opening day of deer season (guests dress code was lax) and they proceeded to the woods post feast. He loved his final job working Security at University Hospital in Columbia. He escorted patients brought in by chopper, or high risk situations and would occasionally translate for Spanish speaking patients in those early moments.

In retirement, Larry loved to watch Old Westerns and The Lone Ranger was his favorite. He loved Country music, especially songs "Chiseled In Stone", "Waltz Across Texas" and Hank Sr. He picked up his guitar and resumed playing and singing. Larry loved time spent with his grandchildren and great grandkids, hunting and at ballgames. He followed those out of state using Facebook, loving and having pride in all. He loved squirrel hunting with his dachshund Buddy, gardening and cooking, delighting in hot peppers.

He was a lifelong fan of international travel and cuisine and he told stories involving his French and Cherokee heritage. His Arkansas roots and time on the Islands left him with a fondness for bare feet touching the earth. He kept true, mowing without shoes and refusing socks in winter; in fact, walking barefoot as he left home for the hospital, socks and shoes tucked under his wife's arm.

Larry was preceded in death by his brother Wesley, as a toddler and son-in-law, Douglas Distler on Nov 3, 2020.

A private family service will be held at a later date, when it is safer. A Christian burial with full military honors will be held at Visitation Catholic Cemetery in Vienna, MO.

An online Celebration Page is planned and those wishing to send condolences may do so at dulletrimble.com

Dulle-Trimble Funeral Home is in charge of the arrangements.
To send flowers to the family in memory of Larry Jefferson "Rusty" Roberts, please visit our flower store.