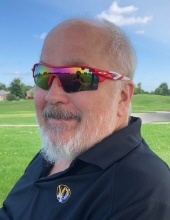 Keith (Paco or KRO) Robert Olive, 55, of Jefferson City passed away at his home on Thursday, March 4, 2021 after his courageous battle with cancer.

He was born on August 12, 1965 in Kansas City to the late William and Mary Ellen (Cassmeyer) Olive. Keith was a 1983 graduate of Helias High School where he participated in football and wrestling even going to the state wrestling tournament. After high school, Keith attended Benedictine University and later Linn State where he received his degree as an Industrial Electrician. He later worked as a line mechanic for Kraft-Heinz in Columbia. If you ever had anything that needed fixing, all you had to do was call Keith.

Keith was a current member of Jefferson City Elks Lodge #513. In his younger years, he enjoyed playing Rugby and was an avid bowler. With years of practice at Westgate Lanes, Keith had 86 sanctioned games of 300 and was in the Jefferson City and Columbia Bowling Halls of Fame. Keith spent his free time taking care of his dogs, traveling, camping, golfing and taking an occasional sip of Scotch. He was a master at grilling and smoking meats always inviting family and friends to share.

Memorial services will be 11:00 a.m., Saturday, March 13, 2021 at Dulle-Trimble Funeral Home, 3210 N. Ten Mile Dr., Jefferson City. The service will be officiated by Pastor Mark Resner and Mr. Steve Resner. Entombment will be in Resurrection Cemetery. Friends may call at the funeral home on Saturday from 9:00 a.m. until the time of services.

Family and friends are welcome to attend services while following social distancing guideline. Facial coverings are suggested while in attendance.

Those wishing to send condolences may do so at the www.dulletrimble.com website.
To send flowers to the family in memory of Keith Robert Olive, please visit our flower store.