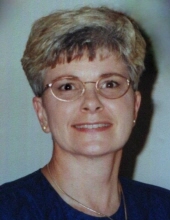 Kathleen was born July 9, 1952, in Brookfield, MO to Francis A. and Marilyn (Miller) Logue.

She was united in marriage in January of 1971, at Marceline, MO to the love of her life, Ernest Raub, who survives.

She and Ernie lived in several cities in northern and central Missouri. They moved to Jefferson City in 1987 and retired there. While living in Columbia, Kathleen worked for the Grand Lodge of Missouri. After moving to Jefferson City, she was an office manager in two local real estate offices, and was the Executive Secretary for the Missouri School Bus Contractors Association until retiring in December 2001. She loved cooking, growing herbs and flowers, reading mysteries, counted cross stitch, traveling and touring historic places, and spending time with her family.

She was preceded in death by her parents, a niece, and a sister, Theresa Owen Coffman.

Memorials may be made to the Ellis Fischel Patient Assistance Fund c/o Ellis Fischel Hospital in Columbia or SSM Hospice in Jefferson City.

Those wishing to send condolences to the family may do so at the www.dulletrimble.com website.
To send flowers to the family in memory of Kathleen Raub, please visit our flower store.