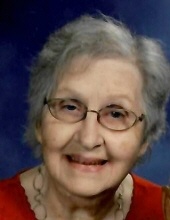 She was born May 14, 1929, in Yarrow, Missouri, the daughter of Albert Ralph and Rosa Mae (Munn) Landis.

She was united in marriage on August 28, 1945, in Lancaster, Missouri, to James Hoover Steen who preceded her in death on January 6, 2021.

June enjoyed being a housewife and mother while her children were small. Later, she went to work at the International Shoe Company until the 1970’s. She also worked for McGraw Edison Company.

The years spent on their farm near Brazito were some of the happiest times for June where family always gathered. She enjoyed cooking, spending time with her grandchildren, and the everyday farm life. She and Jim loved to travel, taking their RV to Alaska, California and yearly to Arkansas for the bluegrass festivals.

June was a member of Dry Fork Baptist Church in New Bloomfield.

She was preceded in death by her parents and her husband, James, of 75 years.

Private family services were held at graveside in the Queen City Cemetery in Queen City, Missouri.

Memorials are suggested to the Phoenix Hospice.

Those wishing to send condolences to the family may do so at the www.dulletrimble.com website.
To send flowers to the family in memory of Juanita June Steen, please visit our flower store.